What is happening to the planet Earth? Remember that everything is faster now. You can hear about and watch in real time the spread of deserts where there used to be abundant forests, to the point that the United Nations dedicated...

Do Not Fear the Crisis. It Will Pass, but You Will Remain.

In the current days, we are always facing insurmountable difficulties that challenge us along the way. Let us look at this example: when a financial crisis arises, attention is given to its consequences. Politicians, economists, businesspeople, analysts, and workers, whether against or in favor, express their opinions on the measures needed to reduce or boost consumption, or any other issue, thereby avoiding, as they expect, greater social upheaval in countries. But despite all the concern, let us learn how to use this moment to achieve balance, without which it will be difficult for us to triumph.

What is crisis if not an opportunity disguised as misfortune? As I have been saying for decades, obstacles are prizes to our intelligence given to us by God, serving as an encouragement for all of those who do not give up on the accomplishments that have been justifying their existences and giving purpose to their lives. It is when one can best develop their talents. Every difficulty bears within itself a solution, as taught by the ancient and experienced Eastern culture. Complaining builds nothing. We must fight against discouragement without deceiving the masses. If desolate, people and nations either fall as easy prey or rise in insurrection.

I usually say that it is in times of crisis that great characters are forged and the most powerful nations arise.

The Wisdom of Confucius

Dreaming is necessary, fighting for a more decent world is needed. Pari passu, it is also required to keep both feet on the ground, that is, to be aware that the desired changes do not occur without real efforts.

Let us meditate on the words of wisdom by Confucius (551-479 B.C.), from The Doctrine of the Mean: “Success depends upon previous preparation, and without such preparation there is sure to be failure. . . . If we know our duties beforehand, it will be easy for us to fulfil them. . . . If we determine our standard of conduct in this life sufficiently in advance, at no time will our spirit be assailed by restlessness.”

This is pure planning and effective action. As a matter of fact, the philosophy of the respected Chinese master is considered one of the foundations of the notable impulse that gave rise to the “Asian Tigers,” also shaken by this global tension. When notable world economies meet—naturally driven by the survival instinct—in search of beneficial mechanisms to face the crisis, it is essential that reason be permeated by the spirit of Solidarity (still rare among international relations). The heart is more willing to listen when Fraternity is the basis of dialogue. The nations shall understand someday that without Fraternal Love, or whichever name given by a technical language, they shall have to go through the greatest afflictions prophesized by Jesus in chapter 24 of His Gospel according to Matthew, especially in verse 21: “For then there will be great distress, unequaled from the beginning of the world until now, and never to be equaled again.”

Furthermore, Life is about being constantly accountable to the court of conscience, from which no one can ever escape, even if he or she does not reveal it. It needs to be stressed that, along with God’s Love, there is also Heavenly Justice. Supreme redemption demands corresponding attitudes from those creatures who are reinvigorated by Divine Love. Otherwise, impunity would be glorified.

Strong willingness is the appropriate answer to any crisis. . . . Let us not forget that—when we remain in God—even adversity presents itself as the most propitious moment to create.

Some people spend years expecting the worst to happen. That alone is a good reason to fall sick. Why not hope for the best and work to make it happen? Thomas Jefferson (1743-1826) calls our attention to a most exuberant truth: “How much pain they have cost us, the evils which have never happened!” And there is still that Russian proverb that advises: “Pray to God but continue to row to the shore.”

I express my solidarity to everyone, the people and government, who face difficulties but do not give up and yet dignify their families and homeland, surviving in this manner and coming up much stronger and productive. Our country has strived to defend itself from the troubles that currently threaten other countries. A good battle provides us with the precious chance to progress. Jesus, however, does not succumb to any crisis. Let us direct our plea to Him, asking for His protection. 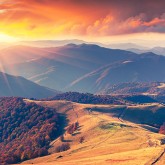