A Word of Encouragement

Even though the world has been facing fierce struggles, let us trust in the future. Let us pave the way for the next generations and put our Hope in humanity, which insists on surviving some crazy and greedy people who have influenced the destiny of...

Reacting to Our Own Pain

In my book É Urgente Reeducar!  [It Is Urgent to Reeducate!] (2010), I wrote: Today, more than ever, with the technological progress being made in the areas of communication (smartphones, the Internet, etc.), even a sick person can comfort...

From the excellent book Mediunidade dos Santos [Mediumship of the Saints], by Brazilian writer Clóvis Tavares (1915-1984), I will point out one case, among many others, in which the words of Father and Conductor Lorenzo Tardy, the biographer of Saint Clare of Montefalco (c. 1268-1308), are reproduced in his book Life of St. Clare of Montefalco, Professed Nun of the Order of Hermits of St. Augustine, published in 1881: “God was still further pleased to reveal to His beloved Servant the state of many souls that had passed from this life.”

Clóvis Tavares comments: “Clara often got to know the spiritual state of many people including nuns and convent benefactors who disincarnated. She used to announce her visions to the sisters and ask them to pray for those souls.”

Therefore, to say—usually out of lack of knowledge or even convenience—that nobody ever came back to tell about it or that there is no news from those who left this world would be far-fetched and would constrain reality to the contingency of knowledge acquired through ways accepted until now. If the trend is currently materialism, then it is definitely nothing more than just a trend. The Spirit is Eternal, and undeniable evidence accumulates in piles and piles. One day, that will dawn on everyone.

Furthermore, the Spiritual World is not a dormitory. It is full of activity there.

Let us see another blatant example.

A Case of Materialization Described by a Protestant Writer

In my book O Sentido da Paixão no Final dos Tempos [The Meaning of the Passion at the End of Times] (1989), I reproduced a remarkable phenomenon of materialization of a Spirit as witnessed by two pastors while they were going to an evangelical church to preach about the most important event in the History of the world, announced by Christ Himself in His Gospel-Apocalypse—His Glorious Return to this planet: “Behold, I am coming soon! My reward is with me, and I will give to each person according to what they have done.” (The Apocalypse 22:12)

I now present you the words of José Nunes Siqueira, author of Átomos da Paz [Atoms of Peace], published by Casa Publicadora Batista:

“Two preachers of the Gospel were riding to the town where they were to give a lecture that evening on the Second Coming of Jesus. They were talking about this inspiring theme throughout their journey. Halfway to their destination, they noticed a well-dressed gentleman by the roadside, signaling and wanting a ride towards the town. They stopped the car. Back to the road, they resumed their conversation about the lecture they were to give later on the Return of Jesus. At a certain point, the strange passenger who had received their Christian courtesy earlier asked them the following question: ‘Will you, gentlemen, preach tonight about the Return of Jesus?’ ‘Yes, that is the message of faith and hope that fills our heart with pure joy!’ ‘Well, you should know that the Return of Jesus will be much sooner than you think.’ Having heard those solemnly pronounced words by the strange gentleman and surprised by the warning message, the preachers turned to the back of the car to have a better look at the unexpected company. But they were even more surprised when they saw there was nobody there. The passenger had vanished, as if by magic. The two preachers concluded that God had sent an Angel in human form to give them a powerful warning about how close Jesus’ Return was. It goes without saying that the two preachers powerfully announced, that evening, the greatest message of hope in the Word of God on Jesus’ Return to establish His kingdom of peace and justice among the people. And from then on, many were the hearts that surrendered to Jesus. Through those two Gospel preachers, it was fulfilled what is written: ‘The Angel of the Lord encamps around those who fear Him.’”

Such prodigies do not depend on belief to take place. They occur wherever human beings—who are, in essence, Spirits—are, even if in atheist materialism. One only needs to check History or follow the news. Take the mediumistic, charismatic, paranormal—whatever you want to call it—talent of the famous Russian sensitive Djuna (1949-2015), for example. The phenomenology of the Soul has always been, since the beginning of the world, summoning people to ponder on the fact that there is something beyond, waiting to be discovered and analyzed in a humble way, that is, without preconceived ideas that are not in tune with Science, Philosophy, and Religion. Humankind must, above all, learn about the spiritual message and the immanent moral power of the phenomenon. 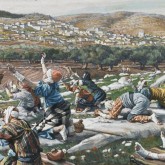 The Social and Spiritual Miracles of Jesus