Time to think things over on the couch

On September 1st, 2011, I launched the book Jesus, o Profeta Divino [Jesus, the Divine Prophet] during the 15th edition of the International Biennial Book Fair at Riocentro in the city of Rio de Janeiro. To my great pleasure, this literary...

Everyone Will Learn How to Govern Themselves One Day

There are still people who get bothered by hearing about the Apocalypse. However, it contains a myriad of brilliant passages, as if they were the most beautiful poetry despite their powerful message. Someone once said that the Divine Prophetic Book...

To Whom Should We Appeal?!

Given the biblical announcement of the Armageddon (Apocalypse 16:16)—the total and final war in which no nation will be neutral—and the Great Tribulation—as never was, nor will ever be (The Gospel of Jesus according to Matthew 24:21)—to whom shall...

The Vision of the Glorified Crowd and the Single Flock

In my book Jesus, o Profeta Divino [Jesus, the Divine Prophet], in which I continue to study the Prophetic Revelation of Jesus for the Simple-Hearted, I felt the need to add a quick comment on the passage “The Vision of the Glorified Crowd,” which portrays the Single Flock as promised by the Ecumenical Christ, the Divine Statesman.

“The Vision of the Glorified Crowd

“9 After this I looked, and there before me was a great multitude that no one could count, from every nation, tribe, people and language, standing before the throne and before the Lamb of God. They were wearing white robes and were holding palm branches in their hands.

‘Salvation belongs to our God, who sits on the throne, and to the Divine Lamb.’

“12 saying: ‘Amen! Praise and glory and wisdom and thanks and honor and power and strength be to our God for ever and ever. Amen!’”

I recall an explanation on the subject given by Alziro Zarur (1914-1979), the late proclaimer of the Religion of God, of the Christ, and of the Holy Spirit, on October 1, 1972, during his Proclamation of the Apocalypse of Jesus, in Ribeirão Preto (Brazil):

“We do not condemn those who reject the thesis of the Brotherly Religions as a path to the Single Flock; but what we consider to be insulting in the skepticism of certain sectarian preachers is that they insist on not discerning where the power of men ends and where the Power of God begins. They should be more prudent, more fraternal, humbler, and more lucid. If Jesus said that there will be only one Flock for one Shepherd, who is He Himself, He knew perfectly well what He was saying. Whether the spiritual leaders know it or not, the Single Flock is a reality. No Christian, worthy of this name, is entitled to doubt the word of the Founder and Supreme Ruler of the Earth. To all those who deride we can only say this: Brothers and Sisters, the Single Flock was not formed in the Gospel that you read, but in the Apocalypse that you did not understand, for, in fact, it is already formed in the Kingdom of God.”

With these words, Zarur, who was a great preacher, conceptualized the Vision of the Glorified Crowd. However, he did not live long enough to explore more this topic that encourages those who work to bring together the Single Flock of Jesus, the Ecumenical Christ, the Divine Statesman, in this world. That is our task. Unfortunately, when some people talk about the 144,000 who were sealed (Apocalypse according to John 7:1-8), they believe that this passage refers only to the people of Israel. But what about the others?

Prophet Isaiah, in his Old Testament book 60:8, anticipates this discussion when he presents the “Glory of Jerusalem”: “Who are these that fly along like clouds, like doves to their nests?”

For this reason and because it is illogical, an exclusivist view of what the Prophet of Patmos, the medium of the Apocalypse, describes to us does not apply here. Some people forget to read and analyze what comes next, which is the Vision of the Glorified Crowd, which is very broad. Did Zarur not say that the Single Flock is already formed “in the Apocalypse that you did not understand?” It is there, in Heaven, that John the Evangelist, after describing the sealing of the 144,000 of Israel, sees and reports that before him is a “great multitude that no one could count, from every nation, tribe, people and language, standing before the throne and before the Lamb of God. They were wearing white robes and were holding palm branches in their hands” (Revelation of Jesus 7:9).

Nothing more, nothing less. This multitude is precisely found in the Vision of the Glorified Crowd, which is formed first in Heaven. 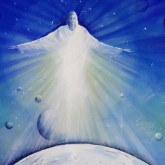