Rome — In October 1990, I started a new series of talks on the Super Good Will Radio Network* that addressed people in the informal and simple language we use when we are talking to a friend. That is why I called it “The Apocalypse...

We need to urgently demonstrate that Prophecy, and here I refer to the biblical prophecies, is not necessarily synonymous with scourge, but a display of the correlations between cause and effect. It is the sum of all we have done...

The Vision of the Glorified Crowd and the Single Flock

In my book Jesus, o Profeta Divino [Jesus, the Divine Prophet], in which I continue to study the Prophetic Revelation of Jesus for the Simple-Hearted, I felt the need to add a quick comment on the passage “The Vision of the...

To Whom Should We Appeal?!

Source: A Goodwill reflection taken from the book “Jesus, a Dor e a origem de Sua Autoridade” [Jesus, the Pain and Origin of His Authority], November 2014.

Given the biblical announcement of the Armageddon (Apocalypse 16:16)—the total and final war in which no nation will be neutral—and the Great Tribulation—as never was, nor will ever be (The Gospel of Jesus according to Matthew 24:21)—to whom shall we appeal in those terrible days to come, or, better saying, that are already here? The Armageddon, for example, is everywhere. Even on the tables of families, in the poisoned food we eat worldwide.

Who can we turn to?! To men?! But they and their ideas of unbridled material enjoyment will be thwarted and those who survive will fight in the utmost despair . . .

There will only be one solution: God! One definitive protection: God! The survivors will only find one way to escape the collective madness: God! Peoples and nations will have only one leader and teacher to teach them how to uplift their decimated and diseased populations: God! And with Him, Jesus Christ and the Souls of the highest category (the Holy Spirit), who form the Occult Government on Earth, which does not cease to exist if someone—who does not see it—does not believe in it.

There are those who might consider all this to be ridiculous, because they are unable to comprehend the ideas and facts that are beyond the restricted material understanding. In this way, it is much easier to deny what you do not understand or cannot grasp. It is like the fox in Aesop’s fable ((c.) 620-564 BC), which, standing in front of ripe grapes that were above the reach of its acrobatic jumps, accuses them of being green and leaves, frustrated.

“Vulpes et Uva — The fox and the grapes

“A fox one day spied a beautiful bunch of ripe grapes hanging from a vine trained along the branches of a tree. The grapes seemed ready to burst with juice, and the fox’s mouth watered as he gazed longingly at them.

“The bunch hung from a high branch, and the fox had to jump for it. The first time he jumped he missed it by a long way. So he walked off a short distance and took a running leap at it, only to fall short once more. Again and again he tried, but in vain.

“Now he sat down and looked at the grapes in disgust.

“‘What a fool I am,’ he said. ‘Here I am wearing myself out to get a bunch of sour grapes that are not worth gaping for.’

“And off he walked very, very scornfully.

“Moral of the story: It’s easier to despise and belittle that which is beyond one’s reach.”

To follow the conformist and cynical attitude of the fox would be a disaster, because, indeed, a lot depends on the intelligence of the leaders. 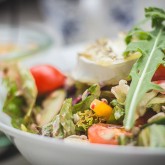 Armageddon on the table