Perseverance Is Synonymous With Faith

The Power of the Creator manifests itself in His creatures according to the generosity of their hearts, whatever their beliefs or disbelief. This certainty fills with encouragement the Soul of those who are determined to do Good....

The Serious Consequences of the Various Types of Suicide

No one is free from falling victim to lower spiritual influences, which, even when they do not reveal themselves in a gesture as extreme as killing oneself, result in consequences that seem like a veritable suicide in life.   How many companies, for...

Source: A Goodwill Reflection taken from the book “A Missão dos Setenta e o ‘lobo invisível’” [The Mission of the Seventy and the “Invisible Wolf”] (2018). | Updated in December 2019.

In moments as serious as the ones we are currently living in the world, the work of the preacher becomes essential in his/her eloquent invitation to each listener, viewer, and Internet user to be alert to the signs of the Triumphal Return of Christ. We cannot be distracted from our responsibility to the Supreme Ruler of this world.

It is fundamental that we all understand what is being said here, because it is the commitments of an apostolate that demands attention and a strong sense of duty, mainly because we are going through a crucial time in History, which was announced by the ancient Prophets, especially in the Apocalypse of Jesus, a book Alziro Zarur (1914-1979) called “the most important book in the Holy Bible on the planet today.”

“13 The sixth Angel sounded his trumpet, and I heard a voice coming from the four horns of the golden altar that is before God.
“14 It said to the sixth Angel who had the trumpet, ‘Release the four Angels who are bound at the great River Euphrates.’
“15 And the four Angels who had been kept ready for this very hour and day and month and year were released to kill a third of humankind.
“16 The number of the mounted troops was twice ten thousand times ten thousand. I heard their number.
. . . .
“20 The rest of humankind who were not killed by these plagues still did not repent of the work of their hands; they did not stop worshipping demons, and idols of gold, silver, bronze, stone and wood—idols that cannot see or hear or walk.
“21 Nor did they repent of their murders, their magic arts, their sexual immorality or their thefts.”

Since the other men and women who were not killed did not repent of their evil deeds (20 and 21), God had to send the sixth Angel of the Sixth Plague so that they would not destroy the Earth:

“12 The sixth Angel poured out his bowl on the great River Euphrates, and its water was dried up to prepare the way for the kings from the East.
“13 Then I saw three impure spirits that looked like frogs; they came out of the mouth of the dragon, out of the mouth of the beast and out of the mouth of the false prophet.
“14 They are demonic spirits that perform signs, and they go out to the kings of the whole world, to gather them for the battle on the great day of God Almighty.
“15 ‘Look, I come like a thief! Blessed is the one who stays awake and remains clothed, so as not to go naked and be shamefully exposed.’
“16 Then they gathered the kings together to the place that in Hebrew is called Armageddon.”

You who follow our preaching of the Apocalypse of Jesus for the Simple-Hearted certainly know where the great River Euphrates is, whose “water was dried up to prepare the way for the kings from the East.”

Despite all the warnings coming to us from the Spiritual World, human beings cause the Armageddon, which so many people talk about without sometimes understanding what it actually means, such is the alienation generated by the “invisible wolf,” in other words, by one or more evil spirits.

Pay attention to the fact that most people are caught by surprise on such occasions.* We must, therefore, warn everyone in a civilized way, but with the necessary firmness. It was Jesus who said that the great day of His Triumphal Return will be when we least expect it. The crowds are still scattered far and wide living on behalf of human and/or material demands, which will prove to be very painful later on for those who are deserting Jesus and His Doctrine: “For in the days before the flood, people were eating and drinking, marrying and giving in marriage, up to the day Noah entered the ark; and they knew nothing about what would happen until the flood came and took them all away. That is how it will be at the return of the Son of God” Jesus (Matthew 24:38-39).

____________________
*Author’s note
Most people are caught by surprise — I recall, and I reemphasize, what the late journalist, radio broadcaster, writer, and poet Alziro Zarur used to say: “We need to prepare Brazil and the world for the facts predicted by Jesus in His Gospel and in His Apocalypse. None of the Legionnaires of God’s Good Will are going to be caught by surprise.” 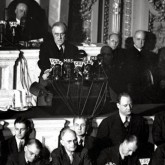 Roosevelt’s Speech and the Apocalypse