The Friend That Returns

Today I want to comment on the return of a Great Friend of Humanity. This is a subject that causes a lot of emotion in our Souls. Regardless of the line of thinking that any one of us adopts, what we all long for in our hearts is to have someone...

Everyone Will Learn How to Govern Themselves One Day

There are still people who get bothered by hearing about the Apocalypse. However, it contains a myriad of brilliant passages, as if they were the most beautiful poetry despite their powerful message. Someone once said that the Divine Prophetic Book...

We need to urgently demonstrate that Prophecy, and here I refer to the biblical prophecies, is not necessarily synonymous with scourge, but a display of the correlations between cause and effect. It is the sum of all we have done...

The supreme objective of the Religion of God, of the Christ, and of the Holy Spirit is to prepare the way for the Triumphal Return of Jesus to planet Earth. It is the Divine Promise of the Savior of Nations, as registered in passages from His Sacrosanct Gospel and Apocalypse that He will return to the world He founded in co-authorship with God.

For this reason, we never get tired of preaching to the world the greatest Good News of all times, to permanently foster the fraternal debate about the extremely advanced meaning of the Sublime Return of the Divine Master:

The following text that I present to you was taken from my book As Profecias sem Mistério [The Prophecies Without Mystery], from the chapter entitled “The Spiritual Roots of a Superior Politics.”

What does the fact of Jesus coming in the clouds express, other than the literal understanding described here? It expresses the fact that when He comes back all areas of human knowledge must be returned to Him, not only Religion, but also Politics, Philosophy, Science, Economics, Art, Sports, and everything else, since these were the talents that the Lord of the Harvest left with His servants so that they could multiply them, while He left on a journey. On His return He rewarded “each person according to what they had done” (The Gospel of Jesus according to Matthew 16:27): to those who met their commitments, the prize of honor; to those who despised them, the corresponding sanction (The Parable of the Talents, the Gospel according to Matthew 25:14 to 30). In God’s Harvest the crime of impunity cannot prosper, a crime that with so many misdeeds has dragged entire nations down.

“Behold, Jesus is coming with the clouds” means that He originates from Above, to where we, whatever our belief or lack of belief, must raise all things that have been befouled by the mockery of some, in order to receive the true enlightenment. It is time for Humanity to look up.

“Jesus is the Sun of Charity,” Alziro Zarur taught us, and I add: And because He is Divine, this King-Star casts no shadows.

So, when everyone is really prepared to live under this Heavenly Luminosity, Politics will cease to be something dark and obscure. Beliefs will be freed from the part of Babylon that makes up everything that man puts his hands on. Economics will no longer be this worldly Babel that the people do not understand, because it has been like this: multitudes abandoned to favor the wealth and abundance of one or other group, of one or other nation.

“Behold, Jesus is coming with the clouds, and every eye will see Him” (Apocalypse 1:7), in other words, He is coming to raise Religion, Science, Politics, Philosophy, Art, Economics, Sports, and everything else to this enlightenment that comes from Above, brought by Him on His magnificent Return, be it literally or spiritually accomplished.

“And every eye will see Him,” no eyes will be prevented from noticing the clarity of Christ that is to be reflected on all the progress born of human genius and that, at the same time, were befouled by that part of  Babylon that unfortunately human beings still insist on cultivating over the centuries.

Jesus coming in the clouds expresses that He is coming in the plenitude of His Moral Power, His Authority, and His Greatness. Only He can cleanse the minds of all creations born from uncontrolled thoughts, so that these same minds can shine, being enlightened with the Divine Part of Religion, Politics, Science, Philosophy, Economics, Art, Sports, and whatever else it might be. This is the Politics of God: showing that in the Holy Bible, from the first book of the Mosaic Pentateuch to the Apocalypse, there are realities that are insights for us, as long as they are analyzed in line with the warning of the Apostle Paul:

“Spiritual things must be spiritually discerned.” (First Letter to the Corinthians 2:14) 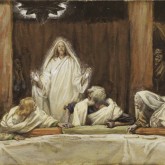 The Friend That Returns