To the Youth of Good Will

I — Youth: When you embrace the ideals of the Religion of God, of the Christ, and of the Holy Spirit, you are signing your spiritual letter of freedom and confidently saying: “I prefer God, Jesus, and the Paraclete (Holy Spirit or Spirit of...

The Peace of God Within Us

On October 26, 2013, when we celebrated one more anniversary of the Temple of Good Will (TGW)—which I inaugurated in Brasília, capital city of Brazil, on October 21, 1989—people overcrowded the monument, in a great pilgrimage, as was published in...

It is not difficult today to find people who are desperate, disillusioned, disheartened, and who ask themselves: “What a struggle! For what? Is all of this worth it? And if the world is going to end—as some say—why continue?”

My friend, if this is your case, know in advance that planet Earth is not going to end so soon. As we learn in the Religion of God, of the Christ, and of the Holy Spirit, what is going to come to an end is the world of evil, this terrible state of affairs that is ALMOST driving you to defeat. Notice that I wrote ALMOST, and I did so in capital letters, because you are going to overcome everything that torments you. But be careful: the end of the body does not end anything at all. “Death does not exist in any part of the universe,” used to say Alziro Zarur (1914-1979), the late creator of the Legion of Good Will (LGW). Anyone who thinks of freeing themselves from suffering by committing suicide will be faced with a horrible surprise: they are going to find themselves more alive than ever, suffering the consequences of their act of rebellion against the Will of their Creator. Zarur also taught that, “suicide does not resolve anyone’s anguish.”

In its Let’s Save Lives campaign, the Religion of the Third Millennium works hard to take the precious knowledge to everyone that existence is eternal. This being so, it is against suicide.

Committing suicide is not just liquidating one’s own life. Every gesture that directly offends Divine Law is suicide. A bad religious person is suicide, so is a bad scientist, a bad politician, a bad teacher, a bad artist, a bad communicator, a bad sportsperson, in short, a bad human being. All those who perpetrate acts against their fellow being is committing suicide. What more are those who harm Nature, wage war, cultivate slander, practice corruption, etc., other than suicides?

Respecting Life at any of its stages is the Maximum Law we must comply with, not only with regard to our fellow being, but in the same way with regard to ourselves, under pain of creating a private hell, a state of consciousness that can be compared to a second death (The Apocalypse of Jesus 20:14), or the spiritual death of which the Holy Bible speaks about.

This divine truth, which was enunciated by Allan Kardec (1804-1869), the Codifier of Spiritism, is well-known: “To be born, to die, to be reborn (reincarnate) yet again, and constantly progress: that is the Law.” No one dies, which is why suicide is madness, even if some defenders of it deny this fact inconsequentially and even encourage its practice. They are poor brothers and sisters who, misusing the means of communication, also build their own future misfortune by leading so many people into error. But every day is the day to renew our destiny, a thought that is found stamped at the foot of the Altar of God, in the Temple of Good Will, in Brasília, Brazil. You may not believe in the eternal nature of life, but you must grant yourself the privilege of having doubts. What if it is indeed eternal? Have you ever thought about that? 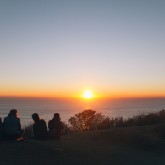