An analysis carried out by Alzheimer's Disease International (ADI) has shown that every four seconds a person is diagnosed with some type of dementia on the planet. The number of cases of Alzheimer's, the most common, will double every 20 years and...

Spirituality and Medicine as Allies to Treat Mental Disorders

Severe depression and anxiety, as well as mood and personality disorders, have increased, causing great concern. According to data published by the World Health Organization (WHO) on February 23, 2017, 322 million people across the globe are...

AIDS – Don’t Give Up the Fight

On December 1 we observe World AIDS Day. This is a battle that has to be fought on a daily basis with clarification, prevention and, more importantly, with no type of prejudice, which—as I have been arguing for years—assails more than the disease...

World Suicide Prevention Day is observed every year on September 10. According to the World Health Organization (WHO), on average two people commit suicide every minute in the world. Calculated over a 24-hour period the figure rises to almost three thousand deaths.

Just in Brazil, approximately 25 citizens take their own life everyday, which amounts to almost nine thousand deaths per year.

The WHO also points out another alarming fact: for every person who completes a suicide, 20 or more may attempt to end their lives.

In the opinion of Dr. Alexandrina Meleiro, a psychiatrist at the Psychiatry Institute of the Hospital das Clínicas at the University of São Paulo Medical School (HCFMUSP), we need to be alert to the warning signs. "Generally speaking, the person becomes sad and hopeless. Because they’re unable to see any solution for their problems they begin to harbor suicidal thoughts. Sometimes they talk about these thoughts and sometimes they do not. They become withdrawn and begin to have a death wish. Over time this evolves into a real intention to die. The act itself may be lethal or may only be an attempt on their life. ‘Oh, but people who are going to kill themselves don’t tell others.’ That’s not true: 90% of people who committed suicide had left some kind of warning. Many of them, around 40%, had visited a doctor within the previous 30 days... what’s worrying is that it was not noted and considered."

In an interview with GOOD WILL TV, Dr. Alexandrina commented on the relevance of an anti-suicide pact: "It’s always important for us to talk face to face with this person, so they feel confident that we understand their suffering and the anguish they feel. That’s when we suggest an anti-suicide pact so that they give us time to reverse the situation. (...) This pact is often the driving force they need to get back to really wanting to live, to seeing the light, to having a healthy environment, and hoping for a new direction in life. This can be done by a professional, by a family member, or by a friend; it can even be the result of having pets: ‘I don’t want to leave my pet alone.’ When we make this pact we create a tie, empathy, and we can bring this person back to wanting to live."

For every problem there is a solution

Given the challenges and apparently intolerable situations, we must reject sinister thoughts of suicide and strengthen our belief in a higher power that never leaves us unprotected. My reasoning is based on these words from the Divine Master: "Peace I leave with you; my Peace I give you. I do not give to you as the world gives. I give you the Peace of God, which the world cannot give you. Do not let your hearts be troubled and do not be afraid. Surely I am with you always, to the very end of the world!" (The Gospel of Jesus according to John 14:27 and 1, and Matthew 28:20).

"There’s no one in the world who doesn’t suffer. We all experience difficult periods in life. The problem is that we always think that our path in life is steeper than those of other people. But if we think that there’s always an alternative we’ll notice that every problem has a solution,” clarified the psychiatrist. And she concluded: "What changes from one person to another is how they seek this solution. Many times it’s not an ideal solution, but it’s one that’s possible at that particular moment. As time goes by you gradually modify things that are causing you anguish. That’s important because they’re strategies for facing up to life. All battles are hard. We shed a lot of sweat because of them, but when we win the struggle our smile of victory is huge. Think about life, about your life, and the lives of your friends, acquaintances, and of everybody. Life’s always beautiful when we have confidence in it."

Thank you, Dr. Alexandrina, for your enlightening words.

Alongside all the psychological support and progress in medicine, it is essential—for those who are thinking about making an attempt at taking their own life—to get involved with the healthy practice of prayer, because this will strengthen the awareness that life continues after the phenomenon of death. Those who inadvertently hasten their arrival in the Spiritual World wake up on the Other Side of Life with their pain multiplied because of their unconsidered suicidal act. One of the worst mistakes Humanity makes is to persist in the unfortunate belief that everything ends with death. 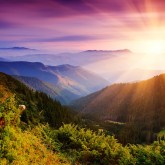