Without Young People There is No Future

In the Legion of Good Will (LGW), we do not encourage an environment of conflict between generations. On the contrary, we ally the bountiful energy of young people with the wealthy experience of older people. And the people gain from this. We are...

I usually say to my dear readers that reacting to discouragement generates good vitality! Otherwise, what is there for us? To lie down and wait to die?! Never! The Soul needs constant incentive to the practice of Good Deeds. Why...

I dedicate this article to the noble spirit Dr. Bezerra de Menezes (1831-1900), a respected Brazilian public figure who is worthy of the title he was given of “Doctor of the Poor” and whose birthday we celebrate on August 29. He...

The Dead Do Not Die

An impromptu speech given by Paiva Netto in the 1980s

Death is nothing but hearsay; therefore, the dead do not die, and here we include our brothers and sisters who are materialist atheists. To diminish the relevance of this fact, which inexorably applies to every human being, would be to deny reality. You do not have to believe in the survival of the Spirits or in their communication with earthly creatures, when allowed by God. However, to disbelieve in such fact does not mean that they do not exist or are condemned to be mute.

Jesus says in His Gospel according to Mark 12:27: “God is not the God of the dead, but of the living. Because you do not believe in this you are badly mistaken.”

I had placed this statement―the dead do not die―which encompasses the entire humanity, on the entrance of the Egyptian Room, of the Temple of Good Will (TGW), the most visited monument in the capital city of Brazil, according to the State Secretariat of Tourism of the Federal District (SETUR-DF).

May we keep an enlightened memory of those who have passed away, as suggested by Ralph Chaplin (1887-1961): “Mourn not the dead . . ./ But rather mourn the apathetic throng―/ The cowed and the meek―/ Who see the world’s great anguish and its wrong/ And dare not speak!”

The dead today are us tomorrow. By condemning them to “oblivion,” due to our disbelief or fear of facing the Truth, we shall “decree” the same fate for all people, hindering our evolution, until, with greater effort, we learn that the great mistake of humanity is to believe that death is the end of everything.

For this reason, I present you the words of Alziro Zarur (1914-1979), the late Proclaimer of the Religion of God, of the Christ, and of the Holy Spirit, in his illustrative and comforting Poem of the Immortalist:

"November 2 is a day for us to read
"Lessons we learn to our bosom:
"Reality is the biggest illusion indeed,
"As Paul Gibier taught us with wisdom.

"The living (the so-called living) carry flowers in their hands
"And shed tears for the dead (the so-called dead);
"And the dead, touched by the pain they understand,
"Watch the living in winding path tread.

"The real dead ones, who do not comprehend
"These matters of such spiritual magnitude
"Behave as if enchanted in their childhood
"Honoring whom have not reached a full end

"Not much wisdom is needed
"To see the ports life has established:
"Once, Christ addressed a young man, and heeded:
“Let the dead bury their own dead.”

"My friends, please, do not suppose,
"That death puts a stop to existence;
"Life continues, and further goes
"Beyond the spheres of celestial distance.

"The dead are not captive filling
"The graves you see before you:
"The deceased are now the living;
"Deceased are, one way or another, us too."

Death does not interrupt Life. On Earth or in Heaven, we continue to follow the path of eternal existence. However, a clarification is needed: this awareness of Eternity can never be used to justify suicide, which is an offense against our Creator and the creature himself/herself.

For those who do not believe it: may you resort to the scientifically granted right to doubt. But what if life does not cease with death? 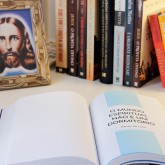 The Death of “Death”