To my patient readers, I would like to bring a few more reflections from my book Sociologia do Universo [The Sociology of the Universe]. In any debate about God, it is necessary to consider that He is not a mere product of Faith. Therefore...

Human Beings: a Species in Extinction

Aristotle (384-322 BC) affirms that man is a rational animal. As a firmly established definition, it is imperative that we widen the ecological debate, which usually favors fauna and flora. Human beings need to be included in this discussion, since with their Eternal Spirits they are the most important creatures on Earth. Many people want to save the Amazon, but how many worry about saving our children?

The Legion of Good Will has never been against progress, but it does condemn polluting water sources and beaches, cutting down forests, and degrading the countryside, in short, all acts of aggression towards the environment, because it understands that the destruction of Nature is the extinction of the human race. At every moment in different countries around the world, man, in his craving to get rich at any price, is digging his own grave. Prophet Isaiah has already warned about this in the Old Testament of the Holy Bible in verses 5 and 6 of chapter 24 of his Book:

“5 The earth is defiled by its people; they have disobeyed the laws, violated the statutes and broken the everlasting covenant.

“6 Therefore a curse consumes the earth; its people must bear their guilt. Therefore earth’s inhabitants are burned up, and very few are left.”

The sixth verse, which is a millennial prediction, points to an atomic conflict, a feasible hypothesis in a society that has already engaged in two world wars and has little respect for the land from which man, since he was born, has taken his sustenance. This planet is the common dwelling place of nations. Human beings and their Eternal Spirits are not creations that are separate from Nature, but its exponents. The wealth of this world is its visible and invisible Humanity, ecologically reconciled with the fauna and flora, and with the whole environment. As a matter of fact, it is worth remembering the sonnet of the great poet and founder of the LGW, Alziro Zarur (1914-1979):

“Mother Nature, I, a poet, am your son, / and calmly I take shelter in your merciful bosom. / It is enough for me to look at you and begin to glimpse / At the endless misery of the human path.

“It is from this contemplation that I return, / And, Oh Perfect Mother, see how much I humble myself: / Only man sullied your brilliance / With his cynical lie of progress!

“Before your untranslatable / And serenely imperishable goodness / All human greatness disappears . . .

“Oh Mother Nature, if something shames me / In contemplating you, Mother, here is the shame: / It is the supreme shame of being man!”

Human beings have placed themselves in this position, which they will have to get themselves out of by their own effort and merit in order not to be transformed into a “species in extinction.” Every day is the day to renew our destiny. Life always wins. 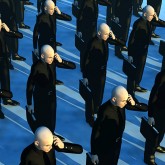 We Are Not Robots