As I wrote in the Folha de S.Paulo newspaper, on February 8, 1987: Soon the biggest names in radio, the press, and TV (and today I would include the Internet), summoned by their human survival instinct, will be talking about Christ’s...

Armageddon on the Table

Let us learn to respect Life, if not the goddess of death will multiply her work. This is what I restated in 1991 in Serra do Pilar, in Vila Nova de Gaia, Portugal, when recording the Good Will Program for the Bandeirantes TV network from...

“Behold, Jesus is returning with the clouds, and every eye will see Him, even those who pierced Him. And all peoples of Earth will mourn because of Him. So shall it be! Amen” (Apocalypse 1:7). What does the fact of Jesus...

Many people get desperate when they hear of the 144,000 saved from the Apocalypse, thinking they are lost: “The number of those saved is so small!”

One hundred and forty-four thousand represents the number of those who, from generation to generation, are chosen by Christ for the great missionary task of taking His Gospel to the world. They are the spiritual quintessence of human race, since much more than 144,000 people are acting in the name of Jesus on our planet. Those who are more advanced, the 144,000, are distributed by Him across all religions, since the message does not need to be ostensively His to be Christian. Jesus talks to all consciences, since His language is that of real Fraternity. Who can do without it? That explains why true luminaries always appear in Humanity, vigorously driving it to progress. It was the Planetary Christ, the Word of God, who sent Moses, Martin Luther, Saint Augustine, Melanchthon, Erasmus, Bahāʾullāh, Einstein, Beethoven, Edison, Tesla, Michelangelo, Zamenhof, Stravinsky, Socrates, Plato, Allan Kardec, Muhammad, Confucius, Buddha, Zarur, Spinoza, the Curies, Lao Tzu, Saint Francis of Assisi, Saint Teresa of Ávila, Gandhi, John XXIII, Mother Teresa of Calcutta, Anthony of Padua, Anchieta, Jean de Bolais, Chico Xavier, and many others, even Marx, to shake savage capitalism and lead it, due to fear of ideologic adversaries, to be humanized. No one owns the Truth on Earth. Do not think that our planet is a madhouse. There is a Man at the helm: Jesus!

So in chapter 7, we see the 144,000 chosen from the twelve tribes of Israel. I have explained already that, prophetically speaking, Israel is not restricted to the Hebrew nation. Why would only the Jewish Brothers and Sisters be saved? Arab, Catholic, Protestant, Spiritist, Umbanda, Communist, Atheistic, Buddhist, Brahmanic, Shintoist Brothers and Sisters―everyone can be included among those saved, since God will judge us by our deeds. Christ advises in His Gospel according to Matthew 16:27: “For the Son of God is going to return in His Father’s glory with His Angels, and then He will reward each person according to what they have done.”

Many people have become atheistic due to religious errors and abuses. That explains an old statement of mine: religious failure generated atheism. But to give comfort to all those who make the effort and want to overcome their own struggles and help so many others in the world, I invite you all to turn your attention to verse 9, chapter 7 of the Apocalypse, the very same that addresses the 144,000 that have been sealed. 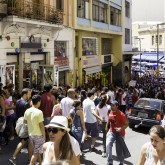