The Broad Sense of Citizenship

As people mature and learn about their rights as citizens—albeit belatedly, inasmuch as two hundred years have passed since the French Revolution [this was back in 1991]—they will finally conclude that no country can actually develop its talents if...

As a tribute to all valuable educators, I bring some reflections I presented to the faculty of the Legion of Good Will’s (LGW) schools, which were partly published in the Correio Braziliense newspaper, of the Brazil’s capital city, Brasília, in February 2000, and also in the Globalization of Fraternal Love magazine, which we especially sent to the participants in the 2007 High-level Segment of the UN Economic and Social Council (ECOSOC), in Geneva (Switzerland):

Schools are essential, but are no substitute for the home. The State and society, together, must produce solutions so that families can raise and educate their children with dignity, as I wrote in the Folha de S.Paulo newspaper, Brazil, on July 27, 1986.

When I inaugurated the LGW’s Educational Institute in São Paulo (Brazil), I summed up in a few words its work principles: Here one studies — brain and heart are formed. This is the Pedagogy of God, who is Love, the Pedagogy that enables individuals to live the ecumenical citizenship, which is established through the full exercise of spiritual, human, and social solidarity. In the Ecumenical Citizen Pedagogy and the Pedagogy of Affection (and therefore of Love and Caring), the Spirit plays an extremely important role in our work. However, when preparing the youth and adults for living in this material world of unprecedented technology—and, paradoxically, nowadays so unstable for those who are working hard for their own future—we must take into highest consideration that students have to be taught efficiently because of the demanding requirements of the competitive labor market they will be getting into. Moreover, this has to be done in such a way that they do not pursue a career for which they have been prepared, but that will no longer exist at the end of the course. It is crucial, therefore, that they receive an effective education so they become fearless and enterprising and may overcome the supervening events that, at any moment, challenge society and frighten off the masses. . . . It will be no good—let us say for argument’s sake—having bold plans if there is no one who has been duly instructed to put them into action. For this very reason, take care of the Spirit, improve human beings, and everything will be transformed for the better!

Educator Suelí Periotto, Supervisor of the LGW’s Pedagogy, who has a doctorate in Education from the Pontifical Catholic University of São Paulo (PUC-SP), tells me that when the renowned professor, writer, and speaker Celso Antunes was asked about our educational work during an interview for the Educação em Debate [Education in Debate] program on the Super Good Will Radio Network, he said: “I’ve been a friend of [the Legion of] Good Will for a long time. . . . I’m fully aware of the work done by your Organization. I’ve visited you several times. I’ve had the opportunity to read one of Paiva Netto’s books that I received, and so I believe that—whether you attribute to it the name ‘multiple intelligence,’ or not—it is completely integrated into this concept. Actually, it has never seemed to me that you’ve been concerned with the exponential development of a student who might be a ‘little genius,’ but with the complete education of the person. And because I fully believe in these educational lines, I reiterate that I’m not speaking to the Legion of Good Will just as someone who’s giving an interview, but as a person who really identifies with its philosophy and its line of work.”

Thank you, Professor Antunes. Your words are a great incentive for us to expand even more this educational line that combines excellent teaching with experiencing the noblest feelings that human beings can manifest in community. 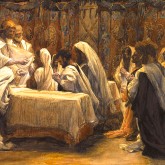 Jesus, the Master of Education, in Education as Master