In recognition of the Paris Declaration, which was signed on November 12, 1995, the United Nations instituted November 16 as the “International Day for Tolerance”. The date was chosen to pay tribute to the signing of UNESCO’s constitution in 1945....

To join forces aimed at the solution of social problems Under the lemma "Education and Culture, Health and Work with Spirituality", the Legion of Good Will is renowned for the contribution given to the Ecumenism field of action. In the 50’s, the...

Human Beings Were Created for Life

Human beings must be proud of existing and tirelessly fighting for Life, as they triumph over themselves in such a way as to conquer their spiritual dignity forever, “the treasure that thieves do not steal and neither moth nor rust destroys” ...

Thirty-two years ago, on October 21, I had the honor of inaugurating the Temple of Good Will (TGW) in Brasília (Brazil), with the indispensable help of the people.

Since its opening, the TGW is the most visited place in the country's capital, according to official data from Brasília’s Tourism Office (SETUR-DF).

In an article I wrote for the Folha de S.Paulo newspaper on August 9, 1987, I delineated the spirit that guides the Pyramid of Seven Faces:

The construction of the Temple of Good Will, with only one altar and throne exclusively dedicated to the Lord God, has as its supreme objective to unite all creatures, independent of their beliefs or disbeliefs (atheists are also God’s children), leading them to the Unity of Accomplishing Faith based on the Unrestricted Ecumenism. Accomplishing Faith is that which is opposed to the idle, egoistic Faith. (...) As Jesus revealed to the Samaritan near Jacob’s well: “God is Spirit,” and for this reason “will soon no longer be adored in stone temples made by man’s hand.” Being Spirit, “He seeks among His worshippers those who adore Him in Spirit and Truth”. The TGW is, therefore, an intermediate phase between the stone temples and the expected time when men will no longer need material temples to pray to God. Natura non facit saltum. Since it is a transitory stage, these words inspired by the teaching of the Planetary Christ apply to it: “In this Temple even the stones will cry out that God is Spirit and it is important that He be worshiped in Spirit and Truth”.

It is the same as saying that in the coming times the restrictive conception of only adoring God under material ceilings will evolve. Temples, no matter how praiseworthy, will not be essential.

Surprisingly, in this ideal era, its attendance will be the most glorious of all times for Humanity because men will understand that God is within them. No longer will anyone dare to attend temples as if they were going to a disposable social obligation, to a picnic, a fashion show. A situation that saddens the religious people concentrated on the divine mission of the clergymen and the sanctums. God’s favorite place for His worship is the human heart. There is no censure here for those who revere their temples to worship the Almighty. For how else would we have built the Temple of Good Will in Brasília?

What we conceive is a prevision of what Christ announced. The day will come when all Humanity will recognize the Temple of the Living God — sacred territory where everyone can live in Peace, as prophesied by Isaiah in the Old Testament of the Holy Bible. Human Beings will finally understand that the Celestial Father in His infinite wisdom should be sought and experienced in every place, during every second of one’s existence. Priests will always be priests. This is born from the soul: in their temples and in any part. That is how men of Faith feel, in all corners of the world.

Man can try, albeit in vain, to destroy the religions on Earth. However, he will never be able to extinguish the religiosity that is born with him, even when atheist.

In honor of the Temple of Peace, a bill proposed by Federal Deputy Rodrigo Rollemberg was made official in Brasília designating October 21 as Ecumenism Day. The initiative received the adhesion of other places around the country, such as the states of Rio de Janeiro, São Paulo, Mato Grosso, Paraná and the city of Novo Hamburgo/RS.

During the entire month of October a series of rich cultural, religious and ecumenical events will celebrate the 31st Anniversary of the TGW, located at SGAS 915, Lotes 75/76, Brasília/DF, Brazil. 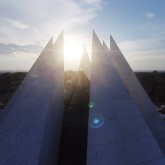