Charity—understood as Universal Fraternity, therefore an instrument for the true progress of the peoples—is a topic always addressed in my articles, because I consider it to be essential for our survival. Thus, I find it appropriate to continue with...

The Ideology of ideologies

During the festivities celebrating the 21st anniversary of the Temple of Good Will I talked about our broad view on the tool called Charity in the development of a global consciousness with a community practicalness that paves with the concrete of...

We Are Not Situated in the Kingdom of Clouds

Distorted thinking about the broad meaning of Charity has caused great harm to society. Once and for all, we have to understand that Charity, in its broadest sense, is the Sublime Commandment of personal and collective survival. It is not restricted to the simple act of giving bread. Charity encompasses all segments of spiritual and human creative action, awaiting an invitation from the Soul to manifest itself in it.

Philipp Melanchthon (1497-1560), the respected German theologian and educator, who headed up the Lutheran church after the death of Martin Luther (1483-1546), placed himself on the side of those who chose to serve: “In essentials, unity; in nonessentials, liberty; in all things, charity.”

In his First Letter to the Corinthians 13:13, the Apostle Paul taught that out of the three theological virtues (Faith, Hope, and Charity), the greatest is Charity, which, as we constantly repeat, is synonymous with Love. Do you doubt it?! All you have to do is consult a good dictionary.

There are also those who believe that Charity is the action of the weak, the escape for those who do not want a definitive solution to social problems . . . But the proposals they have been putting forward for so long have not solved the world’s woes. That is because everything must begin with human beings and their Eternal Spirits, the goal of Charity, which is not the refuge for dreamers or an escapist proposal of the complacent. On the contrary, having Charity as a life decision, as an activity that promotes profound transformations in society starting with the sentiment of each creature, requires determination, character, and courage. This is what the famous orator of antiquity Demosthenes (384-322 B.C.) shows when he states: “You cannot have a proud and chivalrous spirit if your conduct is mean and paltry; for whatever a man’s actions are, such must be his spirit.”

Bereft of Faith and Charity

In these times of globalization, when frontiers fall and mainly on the heads of the poorest populations, people are looking for a safe direction for their existence, which has been governed by discrepant forces, and the destiny they are offered is not always the best. History repeats itself in the sum of mistakes that can result in the uncontrollable movement of the masses. Nations also vomit, and this has already been occurring. How necessary it is going to be to have God’s Charity in our hearts! In these times of misery and madness, many will recognize the inestimable strategic value of Charity, because there will be no Solidary Society and, possibly with time, no planet as we know it, unless we understand Charity as a Divine Plan to survive human greed.

Speaking of God, Mary Alcott Brandon’s maxim is quite appropriate for the text: “There is a force directing the Universe. What we call it is secondary.”

Poor are those who ignore the perfect Law of Fraternity and Justice, those who forget the Creator and His creatures. In the Book of Job 34:11 and 12, we find these words of Elihu: “God repays everyone for what they have done; He brings on them what their conduct deserves. It is unthinkable that God would do wrong, that the Almighty would pervert justice.”

Through the psychography of Chico Xavier (1910-2002), the famous spiritist medium from Uberaba (Brazil) Cornélio Pires (1884-1958), a journalist, poet, and one of the greatest promoters of Brazilian folklore, published in the book Conversa firme these evocative verses:

“Societies and groups
Are destined for Goodness.
God does not create any evil
Or captivity for anyone.”

Fraternity is the Law; Ethics, its discipline; Justice, its enforcement. No one is unhappier than those bereft of Faith and Charity. Who is truly rich? Those who love. The wise and fortunate are those who behave in this same way, promoting the well-being of society. This is the case of the philosopher, physician, and musicologist, the interpreter of Bach (1685-1750), Albert Schweitzer (1875-1965), who for more than 50 years cared for the sick in Lambaréné, in the former French Equatorial Africa. He said: “Example is not the main thing in influencing others. It is the only thing.”

Because we have confidence in the ideal of Good Will, we shall persist until we turn the Economics of Spiritual and Human Solidarity into a reality, based on Jesus’ New Commandment, which is an integral part of the Survival Strategy, as I published in the Folha de S.Paulo newspaper in 1986. 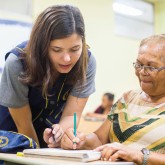