June 17 is World Day to Combat Desertification and Drought. It is worth highlighting, therefore, some recent alarming data. According to UN-Brazil’s website: “The World Health Organization (WHO) has pointed out the need to reduce the emission of...

New York, September 25, 2015. It is with great satisfaction that I greet the signatories of the challenging proposal entitled “Transforming our World: the 2030 Agenda for Sustainable Development” who are gathered at the United Nations Headquarters...

The theme of this year’s United Nations Economic and Social Council (ECOSOC) High-Level Segment, “From global to local: supporting sustainable and resilient societies in urban and rural communities,” which is going to be held from July 16–...

Article published in newspapers in Brasília and A Tribuna, in the editions of April 6 and 10, 2015.

We urgently need to prevent waste. It is a sensible and humanitarian measure in all areas and in different social classes. It is a crime, for example, to let food go to waste when millions of people are still starving.

Dr. Alan Bojanic drew attention to this fact in an interview for the Boa Vontade TV  program Biosfera [Biosphere]. He is a Bolivian agronomist and the United Nations Food and Agriculture Organization (FAO) representative in Brazil:

“The FAO carried out an extensive study to find out the percentage of food loss in the world. We have a figure that’s very painful, shall we say! After the product is harvested, until it reaches the consumer—and even in the house of consumers—we have very high losses. Almost a third of the entire world production gets thrown into the garbage, we might say. This production is very important and it has implications of every type; first of all humanitarian, because this is food that could be given to many needy people. This is an environmental absurdity because a lot of energy was spent in producing it. It also has to do with economic inefficiency. So it’s an absurd situation from a humanitarian, environmental, economic, and financial perspective.”

In O Capital de Deus [The Capital of God], a book that I am writing, I comment on an evangelical passage that brings us an instructive lesson.

Knowing the Sovereign Statutes of the Economy of God, which are still unknown by human beings,  Jesus, the Ecumenical Christ, the Divine Statesman, was able to perform the miracle of the multiplication of the loaves and fish, as reported in Matthew 14:13 to 21.

13 When Jesus heard that John the Baptist had been beheaded on the orders of Herod, He withdrew by boat privately to a solitary place. Hearing of this, the crowds followed Him on foot from the towns.

14 When Jesus landed and saw a large crowd, He had compassion on them and healed their sick.

15 As evening approached, the disciples came to Him and said, “Lord, this is a remote place, and it’s already getting late. Send the crowds away, so they can go to the villages and buy themselves some food.”

16 Jesus replied, “They do not need to go away. You give them something to eat.”

17 “Lord, we have here only five loaves of bread and two small fish,” they answered.

20 They all ate and were satisfied, and the disciples picked up twelve basketfuls of broken pieces that were left over.

21 The number of those who ate was about five thousand men, besides women and children.

Furthermore, let us not forget what the Divine Benefactor taught us regarding the personal capacity of each human being when He said: “You are gods. I shall return to the Father and you will remain here on Earth, therefore you will do much more than me” (The Gospel according to John 10:34 and 14:12).

There are those who, perhaps out of idleness, analyzing the previous extract would argue that Jesus is a special case and that is why there are no parameters for comparing our competence with His, which is divinely superior. We might consider it is unnecessary to rise to such greatness and that all those who have possessions should stop wasting so much. That would be a step in the right direction. And a considerable one. As Confucius (551-479 BC) observed: “Transport a handful of earth every day and you will make a mountain.”

Let us point out that in verse 20 of Chapter 14, the Evangelist Matthew reveals: “They all ate and were satisfied, and the disciples picked up twelve basketfuls of broken pieces that were left over.”

In other words, they did not throw away what was left over. The considerable portions were to benefit those people or others on another occasion. I always say that today’s crumbs are tomorrow’s feast. Let us reflect on that. 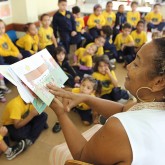