As spiritual and human beings, we should not doubt our ability to achieve what today is seemingly impossible. We are more than capable of overcoming problems, however enormous we consider them to be, according to what the American physician,...

The Deceased and Eternal Life

November 2 is known in many countries as the Day of the Dead (All Souls’ Day). In the Religion of God, of the Christ, and of the Holy Spirit, however, we proclaim it as the Day of the Living, since the dead do not die! When my dear and beloved...

In the history of Ancient Egypt, with its pyramid constructions that are surprising even for today’s scholars, we see many indications of the belief in Eternal Life. In Brasília, Brazil, the Temple of Good Will, TGW, the Pyramid of the Blessed Souls...

There is only one solution to difficulties: to overcome them exceptionally. What makes us winners or defeated is our state of spirit. How many jails and how much torture the followers of Jesus were subjected to, particularly in the early days of Christianity! . . . However, they became stronger and stronger, with some exceptions, of course.

History records that Benito Juárez (1806-1872), one of the central figures in the efforts to unify Mexico, fought to integrate the indigenous and mixed-race population into national life as well as defended the interests of the poor. In order to motivate the people against the French troops of Napoleon III (1808-1873)—which had been sent to support the monarch of the second Mexican Empire, Maximilian I (1832-1867)—that intended to dominate the country in its entirety, Benito, who was to become the first indigenous person to rule the nation, declared: “Because of our stubbornness in not letting ourselves be subjugated, they fight without a future, without any hope of winning . . . Those who do not expect to win are already defeated.”

Here is another timely reflection by the respected Brazilian physician and politician Dr. Adolfo Bezerra de Menezes Cavalcanti (Spirit): “The granaries of those of Good Will are fully supplied by a process of intimate connection with the Creator, particularly through Prayer and Vigilance. Therefore, there is no doubt that the more we proclaim the Kingdom of God, the more the silos of Eternity will come to the aid the incarnate Spirits. The Law of Cause and Effect is always fully active, despite human distractions with regard to the Perfect Justice of Divine Laws. Let us constantly think about God’s Strategy for our lives. Every effort we make is certainly useful in our fight for victory.”

Exactly, Dr. Bezerra! I fully agree with the distinguished Spiritual Benefactor, who until today is affectionately called “the Doctor of the Poor.” 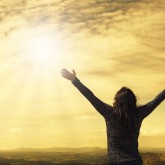