The Divine Tonus of Motherhood

I begin these lines by asking the Holy Mary, the Exalted Mother of Jesus—the Ecumenical Christ, the Divine Statesman—to bring the sublime comfort of her maternal spirit to human hearts. It is the universal shelter...

It is important that we observe the stimulating studies and analyses on the belief of the continuation of life beyond the phenomenon of death. An extensive survey carried out by Ipsos, one of the major market research companies in the world, between September 7 and 23, 2010, with a total of 18,531 respondents from all over the world, showed that 51 percent of the global population believes there is some sort of life after the death of the body; 26 percent says they do not know what happens after death; and 23 percent believes one simply ceases to exist.

The Roper Center for Public Opinion Research consulted their files for the response of the American population to different surveys on the topic that were conducted by several institutes over time. They realized the average was quite stable throughout the decades: in 1994, 76 percent said they believed in life after death, a similar result from 2014—73 percent.

In the United Kingdom, a study made in 2009 by Theos with 2,060 respondents showed that 53 percent believes in life after death and 70 percent believes in the human Soul. In Brazil, a study was completed in 2017 by the Program for Health, Spirituality and Religiosity (PROSER), at the University of São Paulo (USP), under the coordination of Brazilian physician and neurologist Mário Peres—son of my dear friends Maria Júlia and Ney Prieto Peres, pioneers in investigating Spirituality in Brazil and whom I had the honor of having at the ParlaMundi of the Legion of Good Will, in Brasília (Brazil), as lecturers at the LGW’s Spirit and Science World Forum. In the study by PROSER, nearly 1,000 Brazilians from all regions of the country were inquired about life after death, and interesting results were found: 51 percent deeply believes in immortality; 48 percent deeply believes in life after death; and 27 percent deeply believes that the dead can communicate with the living. Moreover, 47 percent believes in reincarnation—atheists and agnostics are included in this group. Additional relevant information collected: 77 percent said they had received some kind of intuition; 70 percent said they had had premonition dreams at least once in life; 51 percent had felt some spiritual presence; 41 percent had seen a Spirit; 31 percent heard voices; and 30 percent had some memory from a past life.

Dr. Mário Peres emphasizes that the rates shown are much higher than the prevalence of schizophrenia both in the Brazilian and world populations, which is 0.5 percent. Therefore, sensitivity is not associated with any pathology or mental disorder. During an interview with the program Conexão Jesus — O Ecumenismo Divino [Jesus Connection — The Divine Ecumenism], on the Super Good Will Communications Network (radio, TV, the Internet, and publications), he explained the data collected:

“This is to be a human experience in a normal context. People, whether religious or not, are guided by their intuitions—they may experience a different feeling or sensation—and they call it according to their perception and use that ability to take decisions. There are criteria and issues to be considered so as to examine the difference between a visual or auditory phenomenon related to a psychotic or schizophrenic episode and a religious or spiritual experience in a normal context.”

What can we infer from the sample of that research? This is a topic to be continually and extensively debated and investigated, free from preconceived ideas, as pioneer researchers have done in the most varied fields of knowledge. It takes courage to face up to the status quo—usually materialistic—and further develop methods, techniques, and technologies in order to study in depth a topic that is so present in everyone’s life, in so many cultures and nations. 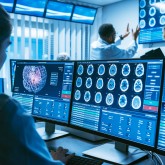