The abuse and sexual exploitation of children and adolescents are subjects that cannot be ignored. These are problems on a global scale that demand constant attention from all of us, particularly on the part of parents and governments. On the week...

There is nothing more powerful than a mother’s heart. On the occasion of Mother’s Day, I pay a modest tribute to all mothers by way of a pioneering woman in mathematics and astronomy and an icon of philosophy in ancient times. In Ecclesiastical...

Worthy of respect and praise is the biography of the famous North American social activist, writer, and lecturer Helen Keller (1880-1968). Although it is known that she became blind and deaf at her eighteen months of age, with the...

At precisely 8:15 a.m. on August 6, 2019, it will be 74 years since the atomic bomb was dropped on Hiroshima. Later, it was the turn of Nagasaki, also in Japan. This date will never be erased from our consciences at the risk that if we forget this abominable attempt on human life, we may repeat it in an even greater degree of intensity, devastating not just a city but the planet itself.

A little of the history

August 1945. In Europe, Hitler had been defeated and was dead; Berlin had been destroyed and was occupied by the Russians. On July 25, days before the impact of “Little Boy,” the nickname of the five-ton bomb that killed nearly 100,000 people on Japanese soil, the North American president, Harry Truman, decided to use what he himself called in his diary “the most terrible thing ever discovered” against an Asian enemy at that time.

Paul Tibbets was the marine pilot chosen to fly the B-29 that took off from Tinian Island. The plane, baptized with the name of his mother, Enola Gay, took off at 2:45 a.m. At his side on the mission that would go down in history and change the geopolitics of the 20th century was the co-pilot Robert Lewis, author of the famous exclamation: “My God, what have we done?”

Decades have gone by. The report of many of the survivors of the atrocious suffering they underwent is still, without a doubt, one of the most important banners of the struggle for disarmament and the non-proliferation of nuclear arms.

“The danger is real”

However, various happenings continue suggesting that the possibility of a Third World War is no illusion. Humanity courts death. One only has to remember the way it mistreats its own dwelling. Peace is almost nothing more than a figure of rhetoric. For a large part of human history, the period in which it has prevailed is extremely small. If there has ever been true peace in this world. . . It has only managed to live in the soul of some of the blessed. This is undoubtedly why Pope John Paul II (1920-2005) in a memorable speech in the 1980s warned that “the danger is real.”

Harmony between religious people is the first to be conquered. The peace of mind of earthly beings created by a new ecumenical stance, inasmuch as it is highly fraternal, predicts social peace, a peace between institutions and the so longed-for world peace, under the protection of the Heavenly Father, the greatest diplomat in the history of this world, notwithstanding our recurrent bad use of freewill. For those who laugh at this reality, a small recollection from skeptic Voltaire (1694-1778): “If God did not exist, it would be necessary to invent him.”

Many nations are not directly involved in the armed conflicts that plague us, but all of them suffer the oppression of fear or of poverty, because of the violence of the new arms or the global misappropriation of funds for the death industry, in detriment to the just economy that creates instruction, education, spiritualization, security, food, and health for people. Therefore, war offends all of us in these times of rapid communication and storms of information, which threaten to short circuit our brains with their thunder and lightning. This is why I want to include in this talk we are having the quote of John Kennedy (1917-1963): “But arms alone are not enough to keep the peace—it must be kept by men. . . . The mere absence of war is not peace.”

In fact the danger is still very real. And we, like fools, are in the midst of it all, getting hit and not knowing where it came from. Quousque tandem, Catilina?

It is essential to stress the proposals and actions of true understanding. The conflict route will be bitter medicine for people.

That is what why we must not lose hope. Let us keep on working “for a better Brazil and a happier Humanity.” That is the direction toward victory. And this is not a simplistic argument. Life teaches us, but how many of us learn in time?

The solutions to the serious problems of our society require us to duly value God’s Capital, that is, human beings and their Eternal Spirit. If not, we shall end up facing a greater world conflict than the two great wars of the 20th century which, analyzed historically, can be classified as just one war divided into two parts. May God spare us from the third! 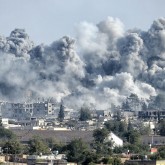