It is Urgent to Reeducate!

It is from Aristotle*2 (384 – 322 B.C.) the teaching that follows: "All of those who have meditated on the art of governing human beings end up being convinced that the destiny of empires relies on the education the youth...

Although contemporary reality presents us with a panorama of domestic violence, of an increasingly larger number of youths involved with drugs and the self-discovery of sexuality by children, skipping important stages of their psychological...

The Broad Sense of Citizenship

Source: Excerpt taken from Paiva Netto’s talks for the series “The Apocalypse of Jesus for the Simple-Hearted,” recorded for the radio, TV, and the press in the 1990s. | Updated in November 2018.

As people mature and learn about their rights as citizens—albeit belatedly, inasmuch as two hundred years have passed since the French Revolution [this was back in 1991]—they will finally conclude that no country can actually develop its talents if it continues subsisting as a great slaves’ quarters, or if it closes up like a xenophobic oyster, or opens itself up recklessly to the point of losing its identity, its sovereignty.

The understanding of the masses will gradually mature until they understand the value of citizenship in its broad sense, because it is not enough to consider citizens just in their physical context; they also have to be considered in their spiritual context, because any component of human groups is, in short, formed by body and Soul. After all, we are originally Spirits. This is the full sense of citizenship, which just cannot allow illiteracy in terms of human letters, but also the ignorance of spiritual matters.

The lack of knowledge of the reality we have just discussed leads to an increase in actions that cause hunger, unemployment, sectarianism, cold individualistic ideals, in other words, egotism, and mockery of those who suffer in society,*1 because wealth and poverty lie within human beings; whether we externalize them, or not, depends on our mentality and on cultural factors (particularly spiritual factors in the near future) that need to be exercised. This is a situation not only affecting Brazil, but also the whole world: for generations, most children and young people have been offered little more than garbage. And yet, there are those who are shocked by the result of this dismal sowing, which is a culture of crime—deriving pleasure from the conflict between peoples or even within families and nations, true undeclared civil wars—of which young people are the main victims (as written in the Apocalypse 8), causing so many others in all classes. It is not enough to roll up the car’s window. It is suicidal to divert our attention away from the fact. Burying our head in the sand, like an ostrich, was never efficient.

This quote by Bonaparte (1769-1821) is very much to the point: “Every hour of lost time is a chance of future misfortune.”

This also applies to nations that emerge, grow, and develop—a time when they will reap what they planted in previous times, or not, if they do not know how to sublimate their spiritual, social, and human heritage, in addition to honoring it.*2 Here is the challenge to be overcome in the field of Education: to combine Instruction with Ecumenical Spirituality. In the Legion of Good Will (LGW), we are absolutely certain that the Gospel and the Apocalypse offer a spiritual, psychological, and ethical base for this transformation to take place; its time has come and, what is more, it is extremely urgent.

For this reason, in an interview I gave to the renowned journalist Ibrahim Sued*3 (1929-1995), I talked about the innovative Pedagogy we apply in the LGW, which combines ethics with teaching in order to educate Ecumenical Citizens. Here are excerpts from what I replied to the questions the late Ibrahim addressed me at the time:

Ibrahim Sued — I know that the Legion of Good Will has an innovative teaching line. What is the LGW’s formula for solving the problem of Education in Brazil?

Paiva Netto — First of all, applying Love, which is not always duly valued, and that was defined by Laura, the mother of nurse Lísias, both characters in the book Nosso Lar ― Life in the Spiritual World, dictated by Dr. André Luiz, by way of the psychography of Chico Xavier (1910-2002), as being “the Divine Bread of Souls, the Sublime Food of Hearts.”

Well, my dear Ibrahim, what we see most out there is the result of a lack of Love. There is nothing more pedagogical than Fraternal Love, inasmuch as it is energetic and just. Naturally, Love must not be confused with connivance, for there are those who believe that loving is agreeing with everything, even with what is wrong. Loving is precisely the opposite, but you have to know how to generously correct the person at fault, even if it is with measured strictness. . . . Aristotle (384-322 B.C.) warned us that “all who have meditated on the art of governing humankind have been convinced that the fate of empires depends on the education of youth.”

But where does true Education begin? . . . In the Legion of Good Will’s Pedagogy, which preaches the Solidary Society, we aim to educate Ecumenical Citizens, in other words, human beings who transcend mere competence, since many people considered as such are leading the world into a calamitous and dangerous situation. Ecumenical Citizens are solidary citizens; therefore, they are not selfish. They do not allow themselves to be seduced by fanaticism, because they know that it makes no sense to hate in the name of God, who is Love. In short, they know how to respect sacred human creatures without prejudice or sectarianism. Who is ethical cannot become cowardly.

When the territory is not defended by the good ones, the bad ones make “just” the victory of injustice. . . . In fact, my dear Ibrahim, what the LGW proposes is a major Re-education program. And that is what we have been striving to do, seeking to arouse the interest of so many idealistic people, who, like us, do not believe in the fatality of destinies condemned to disgrace because of social, political, religious, and ethnic issues . . . Moreover, nothing can be firmly built on infill. This permanent action carried out by the LGW for the re-education of people highly impressed journalist Gilberto Amaral, from Brasília (Brazil), to the point that he declared in the Correio Braziliense newspaper: “The Legion of Good Will gives a clear and obvious demonstration to our country of how to educate, especially the humblest people.”

*1 Citizenship in the broad sense of the word: body and Soul, complete citizenship — See Sagradas Diretrizes Espirituais da Religião de Deus, do Cristo e do Espírito Santo [Sacred Spiritual Guidelines of the Religion of God, of the Christ, and of the Holy Spirit], volume 2, p. 41 — “How Far Governments Go,” by Paiva Netto.
*2 Honoring and sublimating the heritage of people — For Paiva Netto, “to develop the people, it is not enough to instruct them, to educate them; it is imperative to spiritualize the masses. That is the mission of the LGW: to promote Social, Solidary, and Sustainable Development, Education, Culture, Art, and Sports with Ecumenical Spirituality, so there may be Socio-environmental Awareness, Food, Security, Health, and Work for everyone, in the awakening of the Global Citizen.”
*3 Ibrahim Sued — He was considered a pioneer in the writing of social columns in Brazil. Some years after getting into print journalism, he expanded his column and started focusing on subjects that were of national and international interest. The interview with the LGW’s president was Ibrahim’s third major interview of the type in his long and successful career. 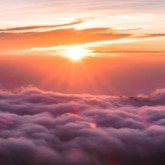