Miscegenation in the World Is Inevitable

The inevitable human miscegenation is a fact of global proportions. Several experts state that the concept of a pure race is increasingly diminishing in the world. An example of this comes from the United States that has created an item in its...

Manifest of Good Will (I)

I received a letter from the reader Edson Rodrigues de Freitas, who lives in Rio de Janeiro city, asking me to have the Manifest of Good Will published, which words I addressed, during the launching of the Fundamental Stone of the World Parliament...

Recognizing One’s Own Faults Is a Solution for Crisis

Source: A Reflection of Goodwill taken from Paiva Netto’s interview with Portuguese journalist Ana Serra, in September 2008. | Updated in May 2018.

When we long to improve things, we need to identify what is wrong, beginning with our innermost being, because if we do not recognize our faults, how can we correct ourselves? We basically have to stop fooling ourselves, otherwise we may play the leading role in this lamentation from La Fontaine (1621-1695): “Everyone has his faults which he continually repeats: neither fear nor shame can cure them.”

Now, this applies to everyone and everything if we want a better global coexistence.

Take the current crisis for example. Capitalism is a succession of crises. What we need now more than ever, in addition to corrective technical measures, is a reform that has dignity and respect for human beings as its banner. Otherwise, the next bubble to burst will be much worse than the one  in the first decade in the 21st century.

Rectifying this sickening custom would be, let us say for argument’s sake, a categorical first step towards building a new and more responsible world community in the course of the third millennium, a community which would have, therefore, fewer sudden crises, including financial and economic ones—even though they are possibly and cyclically caused and predicted, at least by those who are always taking advantage of what the crowd never imagined could happen. Add to this the glaring omission and neglect of certain governments in the world which lead to serious consequences, such as unemployment, the lack of good economic regulation and strong economic bases, wrong estimates of the economic situation, and the indescribable greed and arrogance, which have buried so many great things that did not even have time to be born, thus leaving the people as orphans. As Gandhi (1869-1948) predicted, “A time is coming when those who are in the mad rush today of multiplying their wants, vainly thinking that they add to the real substance (territorial expansion, accumulation of weapons, of wealth, and of power . . .), real knowledge of the world, will retrace their steps and say: ‘What have we done?’”

That is why I prefer to trust Jesus first, whom the Mahatma―an Indian, but above all a universalist―respected as much as our Islamic brothers do. The Lamb of God does not betray us or succumb to any crisis. For our own safety, He comforted us by revealing that:

“I am the Bread of Life. Whoever comes to me will never go hungry, and whoever believes in me will never be thirsty. . . . I am the Living Bread that came down from Heaven. Whoever eats this Bread will live forever” (The Gospel according to John 6:35 and 51).

Now, everything on this planet may get out of the control of human beings, but nothing escapes the command of God. However, when people truly come together to find a solution, even for the most thorny problems, it appears. But “there must be Goodwill,” as proposed by the late founder of the LGW, Alziro Zarur (1914-1979), provided it is not mistaken with good intentions, with which the road to hell is paved, as the popular saying goes. 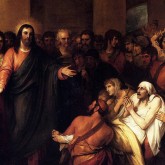 Knowing How to Make the Right Decision Based on Jesus