In Reflexões da Alma (2003) [Reflections of the Soul] I wrote that in a globalizing world that so often crushes respectable traditions underfoot, it is prudent not to ignore the pluralism that exists in every nation, and even in small...

To join forces aimed at the solution of social problems Under the lemma "Education and Culture, Health and Work with Spirituality", the Legion of Good Will is renowned for the contribution given to the Ecumenism field of action. In the 50’s, the...

A Message to Garcia

Some readers who honor me with their patience have requested the presentation of a story told by Elbert Hubbard, which I published in the first volume of O Brasil e o Apocalipse [Brazil and the Apocalypse] (1984). The page is “A Message to Garcia,” an eloquent invitation to those who complain about the state of the world, but who are still sitting on the sofa, to have a greater decisive spirit. Here is the message:

“There is one man [who] stands out on the horizon of my memory like Mars at perihelion.

“When war broke out between Spain and the United States, it was very necessary to communicate quickly with the leader of the Insurgents. Garcia was somewhere in the mountain vastness of Cuba—no one knew where. No mail nor telegraph message could reach him. The president must secure his cooperation, and quickly. What to do!

“Someone said to the president, ‘There’s a fellow by the name of Rowan [who] will find Garcia for you, if anybody can.’

“Rowan was sent for and given a letter to be delivered to Garcia. How the fellow by the name of Rowan took the letter, sealed it up in an oil-skin pouch, strapped it over his heart, in four days landed by night off the coast of Cuba from an open boat, disappeared into the jungle, and in three weeks came out on the other side of the Island, having traversed a hostile country on foot, and delivered his letter to Garcia, are things I have no special desire now to tell in detail. The point I wish to make is this: McKinley gave Rowan a letter to be delivered to Garcia; Rowan took the letter and did not ask, ‘Where is he at?’

“By the Eternal! There is a man whose form should be cast in deathless bronze and the statue placed in every college of the land. It is not book-learning young men need, nor instruction about this and that, but a stiffening of the vertebrae which will cause them to be loyal to a trust, to act promptly, concentrate their energies: do the thing—‘Carry a message to Garcia!’

“General Garcia is dead now, but there are other Garcias. No man, who has endeavored to carry out an enterprise where many hands were needed, but has been well-nigh appalled at times by the imbecility of the average man—the inability or unwillingness to concentrate on a thing and do it.”

The New Commandment of Jesus, the Law of Planetary Solidarity—“Love one another, as I have loved you. Only by this shall all of you be recognized as my disciples” (The Gospel according to John 13:34 and 35)—is “A Message to Garcia” directed to the millions of us yet morally deaf, or lovers of the Law of Talion. It was no coincidence that in a moment of bitterness Gandhi (1869-1948) declared: “An eye for an eye makes the whole world blind.”

We believe in Love and Justice illuminated by the New Commandment. But we never preach accommodation. Hope has to be promoted on this planet, as do the Peace of God, tranquility, and security for the Spirit, which are still only slightly touched on by international agreements, which are generally obedient to disparate interests and the source of so many conflicts. But human beings will get there . . . By virtue of their healthy stubbornness in continuing to inhabit the Earth, they have acquired a paranormal capacity to survive the most acute crises in their history, and when everything seems lost, they will know how to deliver their Message to Garcia at precisely the right moment. 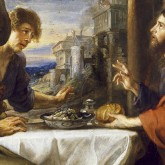 From Jesus’ New Commandment to Peace