I would like to ask permission to share with you, esteemed readers, some lines that were inspired by the efforts of Good Will. According to our belief in the value of altruism, in my literary essay Sociologia do Universo [Sociology of the...

We Are Not Situated in the Kingdom of Clouds

Distorted thinking about the broad meaning of Charity has caused great harm to society. Once and for all, we have to understand that Charity, in its broadest sense, is the Sublime Commandment of personal and collective survival. It is not restricted...

As the saying goes, thought is power. And that is true. In a way, it restates what Jesus taught us in His Gospel according to Mark 9:23 and 11:24: “Everything is possible for one who believes. Whatever you ask...

When Jesus says, “To each person according to your deeds,” He is not determining the random punishment of someone just because He decided that is how it should be . . . The fact is, if this concept of the Master is not in evidence, something grows a lot: impunity with all its corollaries. Its results, so often tragic, represent a shameless kingdom in which someone who steals a loaf of bread is arrested, like in Les Misérables, by Victor Hugo (1802-1885), and those who steal from the homeland are cynically left in freedom. The latter lead multitudes into poverty and despair. The former, because they have been kept uneducated and badly informed, take time to understand the damage that has been done to them by those who should favor them. For this reason, it is not enough to teach people; they must be spiritualized urgently. In fact, anyone whose Spirit has been elevated will not use their knowledge as if they were a roadside thief, seeking an opportunity to harm someone.

The Gospel of Jesus survives inasmuch as it spreads a strong spiritual, moral (I did not say moralistic), ethical, human, and social message. When we study it in Spirit and Truth, under the light of the New Commandment of the Ecumenical Christ, the Divine and, therefore, Planetary Statesman, with the passing of time, which “is the great Minister of God,” *1 we begin to assimilate the concept of Justice allied to Goodness, but never in connivance with evil. The question is not to transform ourselves into accomplices of what is wrong, but to incorporate this noble alliance into the Soul with the feeling of benevolence that is born in the human heart, created by a God who, in the definition of Jesus through John the Evangelist, is Love. Wishing to make this reasoning clearer, I would tell you that I have always aligned myself with Confucius (551-479 BC) when he said from the pinnacle of his millennial wisdom that, “Repay Kindness with Kindness, but evil with Justice.”

Continuing with this vital subject, many years ago in an impromptu speech I gave in Rio de Janeiro, Brazil, I declared that the Justice of God is the true expression of Love. Note that I said of God, not of any creature that assumes His authority, daring to sit on His Throne and decide about human life as if he was Him. The warning from Jesus, the Divine Prophet, in His Gospel according to Mark 13:21 to 23, in the chapter that announces the Great Tribulation of which we talked about in this publication, is clear:

21 And then if anyone says to you, "Look, here is the Christ!” or “Look, there he is!” do not believe it.
22 For false christs and false prophets will arise and perform signs and wonders, to lead astray, if possible, the elect.
23 But be on guard; I have told you all things beforehand.

Maturity will reveal to us this August Face of the Heavenly Father, the pedagogical quality of His Love and His Justice. The Spirit Auta de Souza (1876-1901) shows us a path for deciphering this universal mechanism by which God transforms debtors of His Law into notable agents of it:

There is so much unknown pain
Wounding souls all over the world,
So much bitterness of spirit that cries
With tiredness in the struggle for life;

And there are also reflections of the dawn
Of fortune, which makes the soul flourish,
The glowing and shaken happiness,
Crowned by a comforting light.

There is, however, too much pain,
Overcoming moments of happiness,
Such discouragement and so many misadventures
That the sleeping heart, in full enjoyment,
Must flee from hours of rest,
And reduce the bitterness of others.

Did you register correctly?  This is the path of the Politics of God: make human beings understand the Salvation Mechanism of their Creator, who calls out

(to the) sleeping heart, in full enjoyment,

And reduce the bitterness of others.

And talking about this sublime feeling and acting, let us constantly remember the New Commandment of the Divine Leader, found in His Gospel according to John 13:34 and 35; 15:13 and 9: “A New Commandment I give you: Love one another, as I have loved you. Only by this shall all of you be recognized as my disciples, if you have the same Love for one another. . . . There is no greater Love than to lay down his own Life for his friends. . . . Therefore, as the Father has loved me, so have I loved you. Remain in my Love.”

Alziro Zarur (1914-1979), the late founder of the Legion of Good Will, who defined this notable Law of Christ as “the Essence of God,” quite correctly added: “And Jesus gave His existence even for those who considered themselves to be His enemies.”

No One is Eternally Condemned

The conclusion of the always-remembered writer of Poemas da Era Atômica [Poems of the Atomic Era] is excellent. . . . As time passes, by way of successive lives, everyone begins to understand and experience, through Pain or through Love, the liberating lessons of the Heavenly Educator, through the power of His words and His examples.

The enlightening words of Brother Clarêncio is timely in his constructive dialogue with Hilario, in the book Entre a Terra e o Céu [Between Heaven and Earth], by André Luiz (Spirit)*2: “We all find ourselves on the great march of growth to immortality. In the infinite lines of instinct, intelligence, reason, and sublimation, we are all linked to the law of rebirth as an inalienable condition of progress. We attack multiple experiences and we recapitulate them, as many times as necessary, on the great journey to God.”

No one is condemned to eternal damnation. If they were, the devil would be much more powerful than God, and the Divine Creation would be a satanic comedy, with apologies to Dante Alighieri (1265-1321). . . .

Author’s notes
*1 “Time is the great Minister of God,” a thought often quoted by Alziro Zarur.
*2 Psychographed by Chico Xavier. 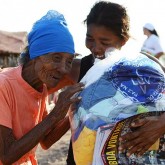