Solidarity to the people of the Philippines

In happiness or sorrow, human beings are never alone. Whether they know it or not, whether they believe or not, they have God for themselves. In the desert or in the orchards, on the mountains or in the valleys, in the cities or in the fields, if...

The Power of Prayer

I frequently receive messages, letters, and notes from those who are facing great suffering. They are mothers whose sons died, fathers fighting against addiction, youth looking for a right way, people weakened by incurable sickness, old men...

The Spiritual Origin of the Prophecies

In my book Os mortos não morrem [The Dead Do Not Die], I transcribe notable studies and very interesting accounts about the reality of life after the phenomenon called death . . . However, it is necessary to reflect on some of the moral effects of this spiritual knowledge that Jesus, the Divine Resurrected, offers us so that we can lead a better life. After all, when we are not properly prepared, death comes as a big scare. That explains my concern in keeping a dialogue with all those who honor me by reading this article and in introducing you to so many facts which have for millennia evidenced the survival of the Soul and the Spiritual Nature of this phenomenon.

The late Proclaimer of the Religion of God, of the Christ, and of the Holy Spirit, Alziro Zarur (1914-1979), asserted that “there is no death at any point in the Universe.”

Would anyone like to vanish, to be separated from their loved ones forever? I do not think so!

In the second volume of the literary series “The Apocalypse of Jesus for the Simple-Hearted,”1 titled As Profecias sem Mistério [The Prophecies Without Mystery] (1998), I reemphasized: The dead do not die! not even our atheistic-materialistic Brothers and Sisters. One cannot analyze the Word of the Creator by belittling any of His creatures, spiritual ones included.

Furthermore, where do the warnings on this serious period the Earth is going through come from? From nowhere else but the Spiritual World, where the Invisible Beings dwell, as revealed by the Apocalypse of the Divine Prophet, Jesus, in the introductory verses of chapter one: “The Revelation from Jesus Christ, which God gave Him to show His servants what must soon take place. He made it known by sending His angel to His servant John, who testifies to everything he saw—that is, the word of God and the testimony of Jesus Christ.” (The Apocalypse 1:1-2)

What would you say, dear readers, are the Angels (so many times mentioned in the Holy Bible) if not Souls? It is crucial to know where we came from, what we are doing here, and where we will go after the unavoidable phenomenon of death.

_____________________
1 “The Apocalypse of Jesus for the Simple-Hearted” — The book As Profecias sem Mistério was the best seller at the 15th International Book Fair in São Paulo (Brazil). It was based on the radio series “The Apocalypse of Jesus for the Simple-Hearted,” which was broadcast for the first time from October 27, 1990 through February 1992. It is still being aired every day on the Super Good Will Radio Network (www.boavontade.com/radio [in Portuguese]). The literary collection is made up of Somos todos Profetas [We Are All Prophets] (1991); As Profecias sem Mistério [The Prophecies Without Mystery] (1998); Apocalipse sem Medo [The Apocalypse Without Fear] (2000); Jesus, o Profeta Divino  [Jesus, the Divine Prophet] (2011); and Jesus, a Dor e a origem de Sua Autoridade — O Poder do Cristo em nós [Jesus, the Pain and Origin of His Authority — The Power of Christ Within Us] (2014), all best sellers at major book shops in Brazil, reaching over 3 million copies sold. 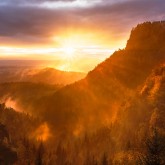