The risk of a Third World War is no illusion. Humanity courts death. One only has to remember the way it mistreats its own dwelling. Peace is almost nothing more than a figure of rhetoric. For a large part of human history, the period in which it...

January 30 is yet another anniversary of the assassination of Indian pacifist leader Mohandas Karamchand Gandhi (1869-1948). In a world marked by violence, it is always good to remember the...

Humanity’s greatest mistake is to live as if there is nothing after death. The Spiritual Mentors reveal to us that one of the biggest dramas in the True Homeland is undoubtedly the arrival of multitudes free from the shackles of the flesh, but...

As a new year approaches, the salutary custom of wishing hope for happier times is repeated. In a speech I gave on December 20, 2008, broadcast by Boa Vontade TV, Super Good Will Radio Network, and the Internet (www.boavontade.com), I analyzed this yearning for renewal, basing my words on the opening verses of chapter 21 of the Apocalypse of Jesus, according to Saint John, and on the final verses of chapter 22.

My aim with this message was to show that the Book of the Final Prophecies only narrates the consequences of human deeds. We write the pages of our own destiny in our innermost being. Therefore, the more spiritualized, educated, and instructed people are, the better course nations will take. As I always emphasize: New Year! A Good year? That depends on us!

21:1 – “I saw a new heaven and a new earth, for the first heaven and the first earth had passed away, and there was no longer any sea.”

The prophecy of Jesus, the Ecumenical Christ, the Divine Statesman, announces a profound transformation knocking at our doors. And if it is “a new heaven and a new earth,” a renewed Humanity emerges! However, what Love is unable to accomplish, Master Pain appears and gives us a lesson.

21:2 – “I, John, also saw the holy city, the new Jerusalem, coming down out of heaven from God, prepared as a bride adorned for her husband.”

Jerusalem is a great religious, political, and social symbol in the world, especially for Jews, Christians, and Muslims of various races. All children of the same Father, thus this is how we should see ourselves, as allies helping prevent so many issues that can be diplomatically removed or resolved, even in advance.

Notice that John the Evangelist narrates Jerusalem descending from Heaven. But why this city and not any other? Let us look at this in parts: He was Jewish. In his believing heart, the idea he had of a bigger city was Jerusalem. He also knew Rome. However, he would hardly say: “The new Rome descends from heaven.” This was an educated and cosmopolitan metropolis, but one that was highly warlike. Carthage can confirm that. Jerusalem had some of these characteristics, nevertheless its people believed in one God, just like the Evangelist-Prophet.

Jerusalem is a mystical delight. It touches our hearts. But for millennia it has been a pretext for sad events. However, Hope never dies, a rationale I conceived of many decades ago when watching a young man on television lamenting the fact that he had lost faith in the future. Some people, who were justifiably bitter, retorted, “I don’t believe in this thing called Hope.” So, what do you suggest? Discouragement? Human beings despising themselves and their peers? There has to be Hope! And, above all, the will to achieve something in life. Otherwise, what is left for them? To lie down and die? The Soul is lacking in good stimulus. . . . How can you tell young people not to nourish Hope? If idealism does not survive, what will they have left? An open field for despondency. Everyone realizes that in a globalized world the evil that happens anywhere can reach us too. Look at the economy, which few suspected. Unbelievable, isn’t it? . . . Moreover, it is necessary to do something that goes beyond the present stage of earthly knowledge: we need to connect with the ideal government that begins in Heaven. This is a subject that one day cautious Science will discuss without prejudice. Intuition is God’s intelligence in us. Often, when reason takes time grasping something Science understands it faster.

In the new year may we seek the compass of our existence in the Higher Spirituality. Let there be Hope, yes, and work, too, so that we can provide young people with the conditions to enjoy a more dignified world, without forgetting those who have lived longer, to an age that, with the advance of medicine, most of us will surely reach. 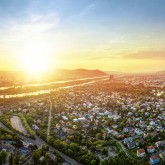