AIDS – Don’t Give Up the Fight

On December 1 we observe World AIDS Day. This is a battle that has to be fought on a daily basis with clarification, prevention and, more importantly, with no type of prejudice, which—as I have been arguing for years—assails more than the disease...

Parents and Children against Drugs

My article today aims to collaborate in the fight against crack, a terrible drug that is lamentably spreading across the country. According to recent research released by the Brazilian National Confederation of Municipalities (CNM), crack...

In a world that is often ruled by immediatism and where with each day social demands impose on us a growing dispute for a place in the sun, stress finds fertile ground to proliferate. Adults are not the only victims of what is considered to be one...

I have always drawn people’s attention to the fact that they should be careful with the traffic on our highways and in our cities.

In an editorial by the respected Brazilian newspaper Folha de S.Paulo, in May 1994, I found this quote from Goethe (1749-1832), the famous German poet and writer: “Death is, to a certain extent, an impossibility which suddenly becomes a reality.” Indeed, most human beings do not think that one day they will have “to pass on to a better or worse place”, according to their behavior on Earth.

Humanity’s greatest mistake is to live as if there is nothing after death. As the Spiritual Mentors reveal to us, one of the biggest dramas in the True Homeland is undoubtedly the arrival of multitudes who are free from the shackles of the flesh, but completely ignorant of what the Invisible World is.

But let us go back to the editorial from the Folha de S. Paulo newspaper on traffic violence, the content of which, unfortunately, is still extremely current today: “. . . the saying by the great German poet reflects with admirable precision the way in which many people face death. There is no doubt that this view is especially common among young people, whose inexperience, allied with a natural haste, imbues them with a feeling of omnipotence and immortality. And this feeling, because it is extremely deceitful, often leads to terrible consequences. The most notable and most perverse of these can be seen in the large numbers of young people who get involved in traffic accidents worldwide. Traffic disasters are already the main cause of death in this age group, resulting in more victims than AIDS and other incurable diseases.”

There is no point in creating laws for human beings; they need to be prepared for the Law. The Traffic Code already exists. Everyone knowns that they have to use their safety belt, reduce their speed, and respect road signs and lanes. However, why do so many people not obey these rules? Perhaps it is because they do not value their own life.

The Don’t Rush. Say a Prayer! campaign, promoted by the Legion of Good Will (LGW), aims to raise driver and pedestrian awareness so they obey traffic laws out of Love for their own life and that of their fellow beings.

Here, then, is our contribution to the end of traffic violence, so the irresponsible speed that is still seen on our streets is sublimated in ever-faster acts of respect for all and of assistance for those who live in poverty. This is our motto: To promote Social and Sustainable Development, Education, Culture, Art, and Sports with Ecumenical Spirituality, so there may be Socio-environmental Awareness, Food, Security, Health, and Work for everyone, in the awakening of the Planetary Citizen.

LGW — a free passage to Life

Sadly, few people reflect on the fact that the traffic in Brazil has made more victims than many wars. According to the Brazilian National Traffic Department (DENATRAN), 150 people die every day, on average, in these accidents in Brazil. Many of these cases would not occur if drivers and pedestrians were more prudent and observed simple tips when driving a vehicle or crossing the street. These same attitudes would avoid the suffering of thousands of families and the loss that, according to estimates by DENATRAN, exceeds R$ 30 billion every year as a consequence of traffic accidents on our highways and urban roads.

For this reason, it is essential:

— not to drive when you are tired, emotionally upset, or under the influence of alcohol and/or any narcotic substance;

— not to exceed the speed limit;

— to always use the safety belt;

— to know well the vehicle you drive and keep it in good working order;

— to carry children up to 10 years old in the back seat of your automobile.

Awareness is the first step towards ending the “war” on Brazil’s roads and streets. In order to achieve this, it is very important, above all, that Goodwill be present between drivers and pedestrians.

Let us all live in peace in the traffic!

Extracted from BOA VONTADE magazine, Issue 26, August 1958, the prayer became famous in the interpretation of Alziro Zarur (1914-1979), late Founder of the Legion of Good Will (LGW), in his radio programs. 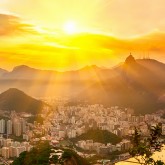 Human Beings Were Created for Life