Ecumenism That Overcomes Hatred and Disputes

In an interview I gave to Portuguese journalist Ana Serra about my book Reflexões da Alma [Reflections of the Soul], launched in Portugal by Pergaminho Publishing House in 2008, I said: Educating with Ecumenical Fraternity...

When I talk about Extraphysical Life, I am referring to the life that continues after the phenomenon called death. The Spiritual World, I like to reiterate, is not something abstract, indefinite. It does exist and is filled with spiritual energy and...

The Noble Destination of a Crystal

June 1, 1989, marks the day on which the Sacred Crystal was placed on the pinnacle of the Temple of Good Will (TGW), one of the Seven Wonders of Brasília (Brazil), a few months before it was inaugurated on October 21. The idea of having a stone at the apex of the monument was in the plans from the outset. It would bring sunlight into the Seven-faced Pyramid, lightening up its rooms and promoting chromotherapy, as so many people claim. The days passed quickly and no stone appeared that was of appropriate size to grace the place it was destined for.

How could this impasse be resolved? God’s Designs had the solution to this difficult undertaking. On March 16 of that year, on my return from Brasília, where I was following closely the construction work of the Temple of Peace—as the TGW is also known—I happened to see a TV news report.

Here is what happened: I was in my office in São Paulo (Brazil) late at night. I turned on the TV to watch the former television channel TV Manchete. The news was already half over. What happened then? I saw the stone very quickly and heard people saying it was the largest pure crystal in the world. I immediately called the esteemed Haroldo Rocha, who at the time was responsible for the LGW in Brasília, and said: “Haroldo, I just saw this report on TV Manchete. Go and get that stone, please. If you don’t bring it with you (and I laughed hard), don’t even bother coming back. So come back, but bring it with you, because that is what we are looking for.” By next morning, articles on the subject were already in the media spotlight.

So Haroldo went to Cristalina (Brazil), where he spent the whole day. There were a lot of foreigners there. Everyone wanted that big piece of quartz. He patiently waited for his turn and at the end of the afternoon he was able to talk to the miner Chico Jorge about the need to take the stone, which would be put in a special place. He described to him the Temple of Good Will that was under construction. It was then that the miner’s wife approached them and, intervening, said: “Chico, you’re going to pass this stone over to the Temple, because I’m a listener of the LGW’s [radio station] and I like it very much.” In short, that is how it was. Haroldo returned, bringing with him the stone that is today gloriously embedded in the pinnacle of the TGW. What is most striking about this story is that, in that same week, the miner’s wife, Maria de Lourdes, remembered a dream in which her husband found a stone that would have a noble destination. Since it was placed at the apex of the LGW’s pyramid, this beautiful crystal has been spreading the light of God’s Love and making the mystical vocation of the Brazilian capital even stronger.

To the couple Chico Jorge and Maria de Lourdes* goes the gratitude of the millions of pilgrims who, when they enter the nave of the Temple of the Blessed Souls, of the Luminous Spirits, benefit from the healthy energy that emanates from the Crystal of the Temple of Good Will. 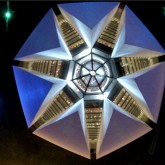